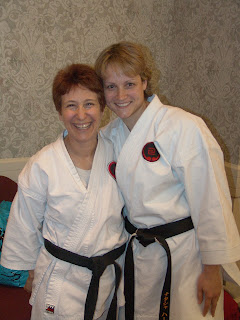 ‘Wa is the humility to honor another’s personality.’  The Japanese symbol for ‘wa’ and this saying was printed on the back of the first t-shirt I bought at the Netanya IOGKF headquarters.   I wondered why Sensei Pantanowitz chose this particular saying for the shirts, but never asked him about it.  It was the first time I’d encountered this word, but far from the first time I’d encountered Japanese thought in the karate world.
The first Japanese saying I remember learning was mizu no koro.  Mind like water.  As a white belt I understood the general drift.  Like the ‘ju’ in Goju-Ryu, one should flow, one should yield.  Yielding is more effective in defense, and in life, than meeting force head on.  The latter tends to lead to pain and isn’t usually successful.
Understanding this expression was one thing, utilizing it was another.
As a beginner I was totally enamored of all things Japanese.  I loved Samurai movies, especially the series, ‘Zato-ichi, the Blind Swordsman.’  I loved Japanese food, especially sushi and miso soup.
I began studying at UMass Boston in the winter of 1979.  I approached Professor Watanabe to get special permission to sign up for Japanese Language 102.  The prerequisite, 101, had begun in September, and the professor didn’t want to let me into 102.
“But I already speak a lot of Japanese,” I implored.  I said “mai geri” and did a front kick.  He smiled.  I continued, “sokuto geri” and did a side kick.  He was duly impressed.  I went through the names of the all the blocks, punches and kicks I knew.  When he still didn’t look totally convinced, I broke into an imitation of Zato-ichi and his concubine.  That did it.
I studied Japanese language, art and literature at UMass.  It gave me a basis for understanding the culture that had produced Goju-Ryu karate.  A culture that was so different than the world I grew up in, the world that shaped me.
Coming back to the t-shirt and the spirit of wa: it took me a while to realize what I was meant to learn by this.  Most teachers, including myself, have a tendency to try to shape the student in their image.  They view the student through the lens of ‘me.’
Students naturally imitate their teachers and want to be just like them. It is comical to see students do kata with the exact same body language and facial grimaces as their teachers.  This is complimentary to the teacher, but I realized I have to fight against this tendency.  As a teacher I need humility to encourage my students become more like themselves, and not more like me.
http://www.karateisrael.co.il/index.php?option=com_content&view=article&id=10%3Ajerusalem-club&catid=5&Itemid=22&lang=en

Posted by sara-rivka yekutiel at 1:23 AM