Anger, Splits and a Key to the Dojo 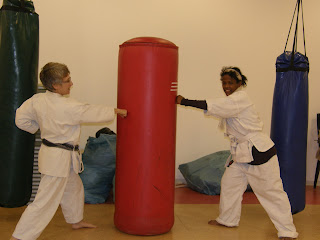 At the USAAU National Karate Championships in July, 1975 I was 17-years-old.  My sensei and his sensei had a long discussion about which division I should compete in.  They reasoned that I would do better with a group of my peers - other 17-year-old girls.  They were wrong.

I was only a green belt.  I had been training less than a year.  Some of the girls in this division had been training since pre-school and were black belts.  After getting my butt kicked in kata and kumite I went over to watch the adult women's green belt division.  The competition was much less fierce.  I may have stood a chance there.

As I walked away I saw something I will never forget.  A teenage girl about my age was doing a complete split and looking very satisfied with herself.  I became furious.  Not only had I not won any medals at all but she could do a split and I couldn't!  I vowed that the next time we met up, I would be doing a split, too.

It took me six months.  In addition to doing endless kata, hitting the heavy bag and makiwara, I stretched and did splits every time I was in the dojo.  And I was in the dojo four nights a week and Saturdays.  By the time I was a brown belt I was doing splits - both ways - and today, 36 years later, I am still doing them.

Anger motivated me.  I was very angry about many things.  Largely, I was unconscious of the exact reasons for my anger, but I felt it in my body and my soul.  The punching bag became the outlet of this angry energy.

One night, after class, I started hitting the heavy bag.  I punched it, I kicked it, I pushed it, then I punched it again.  I saw no one.  I heard no one.  It was only me and the bag and the strikes: front hand punches and back hand punches; elbow strikes; round kicks, side kicks and front kicks.  There was no end to my anger and no end to the energy which was absorbed into that Everlast bag.

All the other students had changed clothes, chatted and left.  I didn't notice.  Sensei tapped me on the shoulder to get my attention and I looked at him.  He was dangling a key.  "Lock up when you're done," he said, and left me there with my anger.

It was a long time before I was too exhausted to continue.  When I got there early the next night the punching bag was waiting for me.  So was the anger.