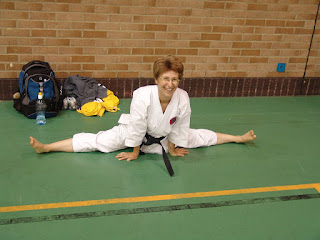 Old students occasionally contact me and ask if I remember them.  I always do.  But I remember some better than others.

There was one kid who started training with me when he about 11.  We’ll call him Larry.  His parents signed him up for my karate class at the Newton, Massachusetts JCC because he was being bullied in school.

Larry was a really sweet kid, smart, kind.  For some reason he didn’t fit in at the local public school, so his parents gave him a geographical cure and enrolled him in a snobby prep school.

As a martial arts instructor I’m supposed to tell the kids that they are forbidden to “use it” unless their lives are endangered.  Conflicts should be solved by words, not fists.  It’s an ART, not meant for solving social discomfort.

However, in Larry’s case, I was hoping that he would haul off and whack the next kid who bothered him.  His opportunity came on the first day of Jr. High.   Standing in line in the cafeteria, waiting for the inevitable inedible lunch, he found himself being verbally abused by the large school bully.

Larry then used the little known karate “tray technique.”  He told me this story about 30 years ago.  I don’t remember the exact words he used, but I do remember the look of triumph on his face as he flipped back the hair that covered one eye and said, “And then I dumped my whole tray over his head.”

“With the food on it?” I asked.  He grinned.  Of course the bully challenged him to fight.  After the final bell they met outside and duked it out.  Larry used some of the better known punches and kicks; the bully backed off, and Larry was never victimized again.  His goal had been achieved, but he continued training and went as high as brown belt.

Some years later Larry called me to tell me to say he’d become a psychologist who worked with children.  I wonder if he works with kids who are bullied, and if so, if he suggests the tray technique.  It certainly led to good things for him.
Posted by sara-rivka yekutiel at 11:44 AM