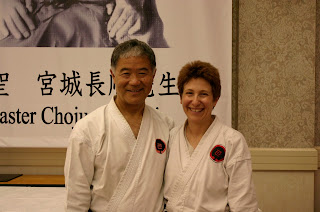 My first karate tournament was not a great experience.  The day before my boyfriend (yes, the same one who had forced me to choose between him and karate) and I broke up once again.  I dealt with this painful experience the way I thought best.  I drank four shots of tequilla and passed out.

I awoke in the morning with an awful  hangover.  Unable to eat due to nerves (a problem that would plague me for years) I arrived at the tournament - I believe there was a two-hour drive involved - and sat with 20 other nervous white belts.

After much waiting I stood up and managed to get through the kata, "Taikioko #1," without throwing up.  Not only didn't I win, I didn't even come close.  I was mad.

Sensei had a saying, "Don't get mad, get even."  I had already been training hard.  Now I stared training harder.  Not only did I attack the heavy bag in the dojo, I also kicked the oak tree at the bus stop where I waited up to 20 minutes every day.  And I did the kata many, many times.

The next tournament was in Connecticut, also a long drive - but this time with no hangover.  I performed "Taikioko #3.  I did it strongly.  I did it with a loud kiai and a mean facial expression.  I ended up facing backwards and improvised an extra move because even though none of the judges were from Goju-Ryu Karate I knew that they knew that there isn't a style in the world that ends up facing the opposite direction from which it starts.

And that was good enough for a large, shiny third-place trophy.  I hugged it all the way home.

To read about my tournament record see: